Join us in Morocco!!

Join us in Morocco, a magical and mystical destination, where the Atlantic Ocean meets the Mediterranean Sea, and African, Arab, and European civilizations converge. Known around the world for its grand, ornate architecture and bustling markets, Morocco also boasts immense natural beauty. Cultural immersive trip highlights include a camel ride through the Sahara desert, cooking classes, a visit to a wellness spa or hamaan, Though largely untold in the West, Morocco also has a fascinating history, having been the home of countless cultures and the muse of some of the world’s most accomplished artists. 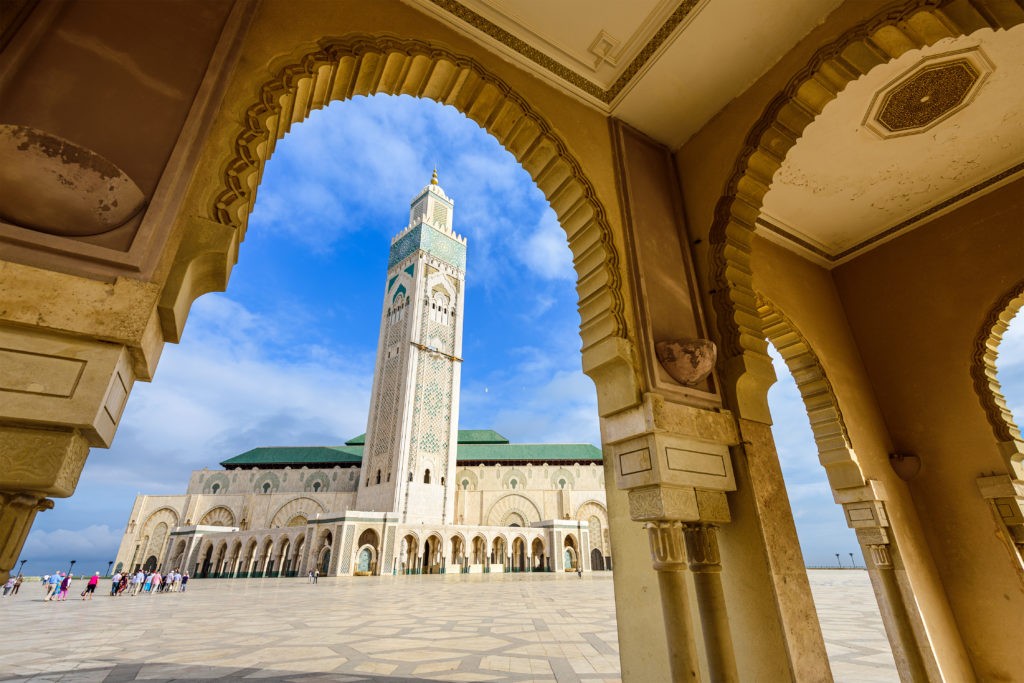 At your arrival in Casablanca airport, our representative will be meet you.  You will have lunch in Casablanca and from there you will visit the beautiful Hassan Masque.  You will then be transferred to your hotel in Rabat, the capital city of Morocco which was built in the late 12th century. 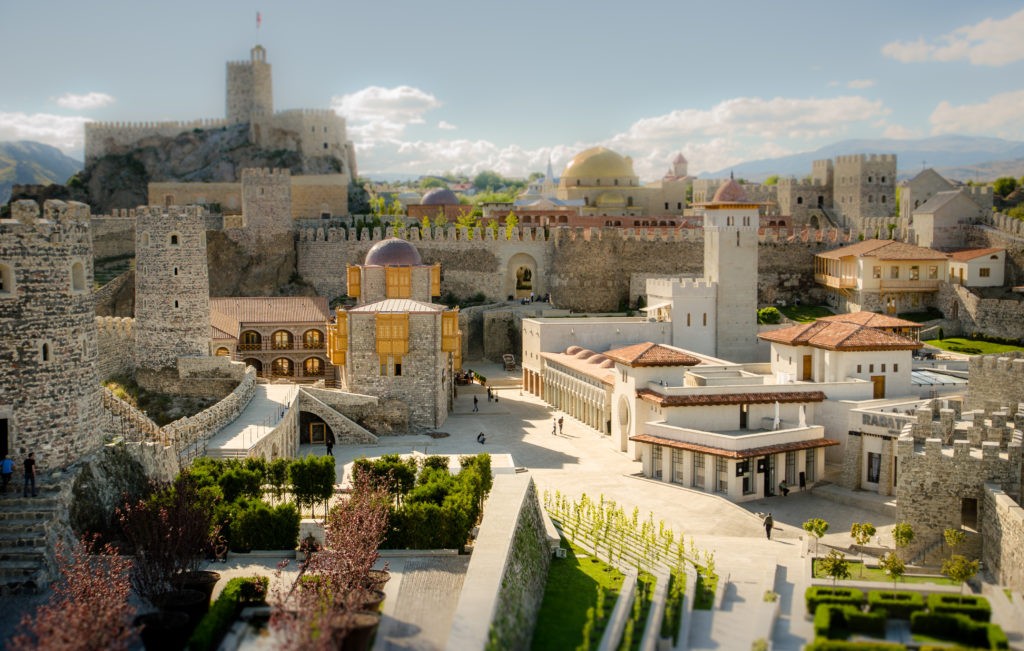 View of the famous fortress Rabat in Akhaltsikhe, Georgia

Our exploration with the expert guide will start with a visit to the quarter of the royal palace where major royal ceremonies are held. We will continue to The Kasbah of Chellah, a 14th century necropolis built on the archaeological site of a Roman city named Sala Colonia of which we will see the remains. Then into Mohammed V mausoleum, a rich decorated monument made of white marble where we see the tombs of the last two kings of Morocco, many consider this as the most beautiful architectural monument in the whole country and officials should visit it as a part of the protocol. We will take a comprehensive tour of the Archaeological museum exhibiting objects discovered during excavations of pre-historic, Punic, Roman and Islamic sites. Our tour guide will lead us to the rich “bronze room” where we will admire the roman bronze and marble statues discovered in different architectural sites in the country. In the evening, head to a local restaurant and enjoy your welcome dinner. 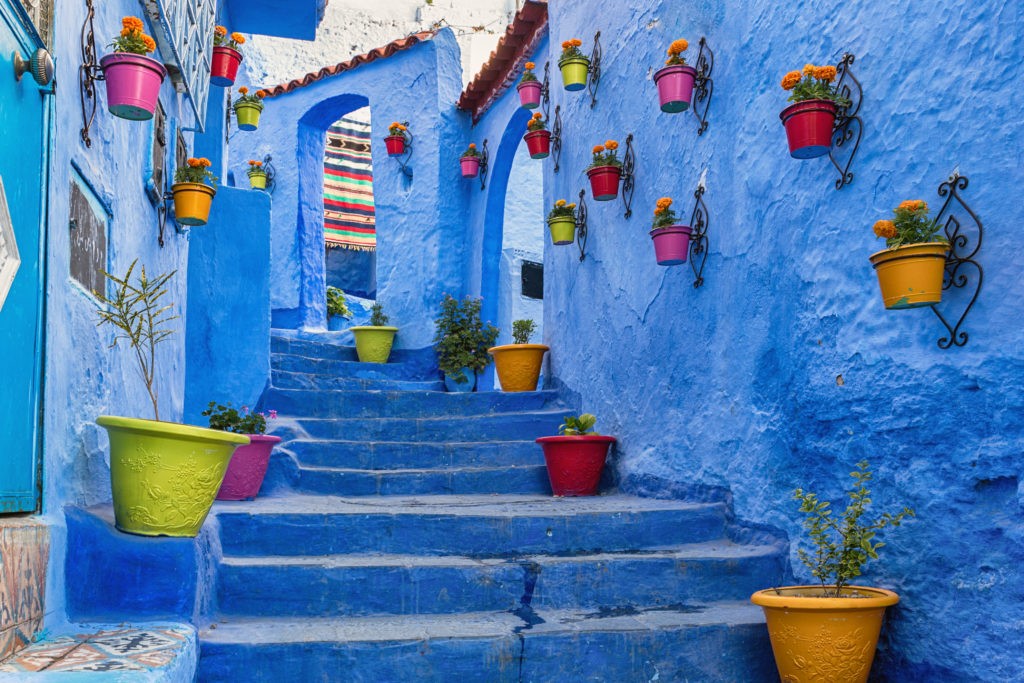 After breakfast your drive takes you north to the delightful town of Chefchaouen.  Perched 2000 meters above sea level, in the Rif Mountains, it was founded by one of the  Moroccan Sultans in 1471 as a base to attack the Portuguese in Ceuta.   In the ensuing decades, Chefchaouen grew increasingly as the population was boosted by Muslims and Jewish refugees from Spain. Chefchaouen is a city with blue and white lime-washed houses. A powerful charm that you really can feel in the Outa-el-Hammam square, in the cobblestone medina. Sit in café the terrace, you can enjoy the attractive view of the grand Tarik-Ben-Ziad mosque whose octagonal minaret is inspired by that of the Torre de Oro in Seville. This Andalousian architecture can be found in the Kasbah and its gardens, at the center of the medina. Its walls and its 11 crenulated towers, of which one used to be a dungeon, house an interesting ethnographic museum. In the small museum in the Kasbah can be found collections of embroideries and colored and varied pieces of clothing like those worn by the region’s women. The famous Djellaba, this long and ample garment worn by the men and women of North Africa, was created here. The welcome and great hospitality provided by its inhabitants can be experienced during a visit to a traditional oil mill (there are more than 1500 of them) or a craftsman’s workshop. Over and above its weaving, Chefchaouen is renowned for its basket-making and its pottery. 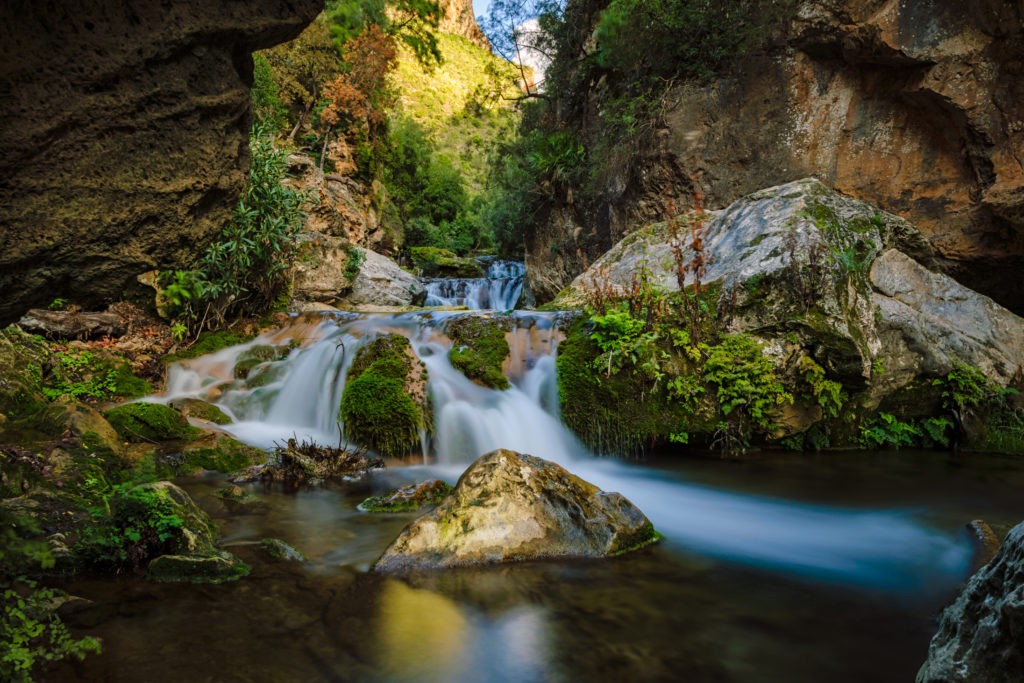 This morning you will leave Chefchaouen and enjoy a scenic drive across the Rif Mountains to the Roman site of Volubilis considered as the most important archaeological site in Morocco where our guide will take you for a comprehensive tour before you drive down to the nearby plain of Meknes, an imperial city that served as a capital of Morocco in the 17th century and where your guide will show you its highlights such as the Royal granaries and stables, the monumental gate of Bab El Mansour as well as the Mausoleum of the King and the square of El Hedim. From Meknes, continue to Fes across the Saiss plain.

Fes is the oldest royal city in Morocco. Founded in the 9th century, it is said to be the most complete medieval city of the Arab world as it has preserved all its medieval aspects and way of life. Start your day with a tour of the ramparts for a generous introduction to the history and the culture of the city. 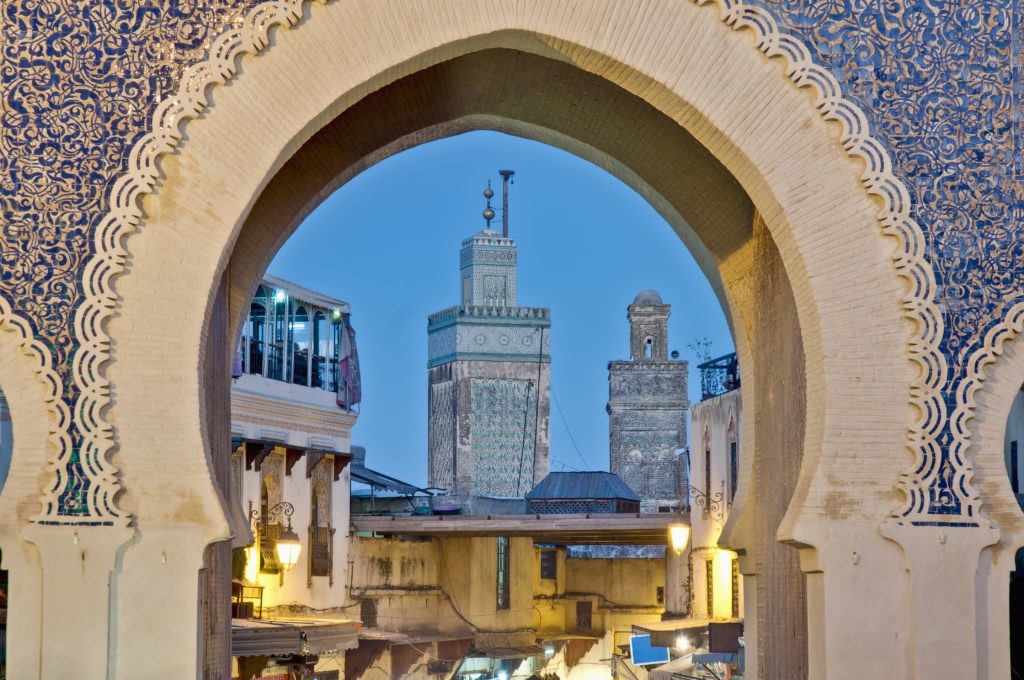 Fes will stimulate all of your senses on a guided tour inside Fes el Bali (old Fes) where you will see the food and spice markets, handicraft quarters, auction markets and colorful Souks. 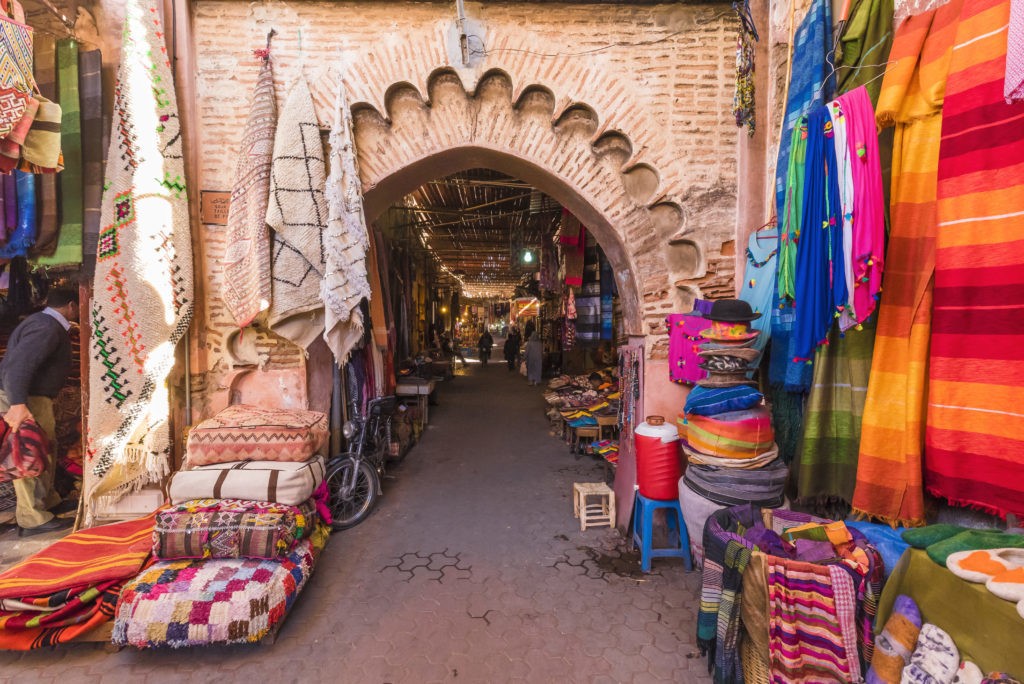 As part of your travel to do good project, you will visit the medieval children’s schools and meet the school teacher and the pupils, enter artisan workshops and discover the secrets of their ancestral arts, visit the public bakeries and pastry makers in the residential quarters and see their historical fountains, mosques and sanctuaries. The highlight of your morning visit will be inside the 14th century Medersa (theological school) for its most intricate architecture, and around the karaouine mosque which was once the oldest university in the world, founded in 857 ad. By a lady from Fez. In the afternoon visit to Royal palace of the late 19th century where the king Hassan I lived. This palace is now a museum of Fez traditional arts. Continue to Fez El Jedid (new Fes) for a stroll in the Jewish quarter where you will be able to visit a 17th century synagogue and have some time in the jewelers market. 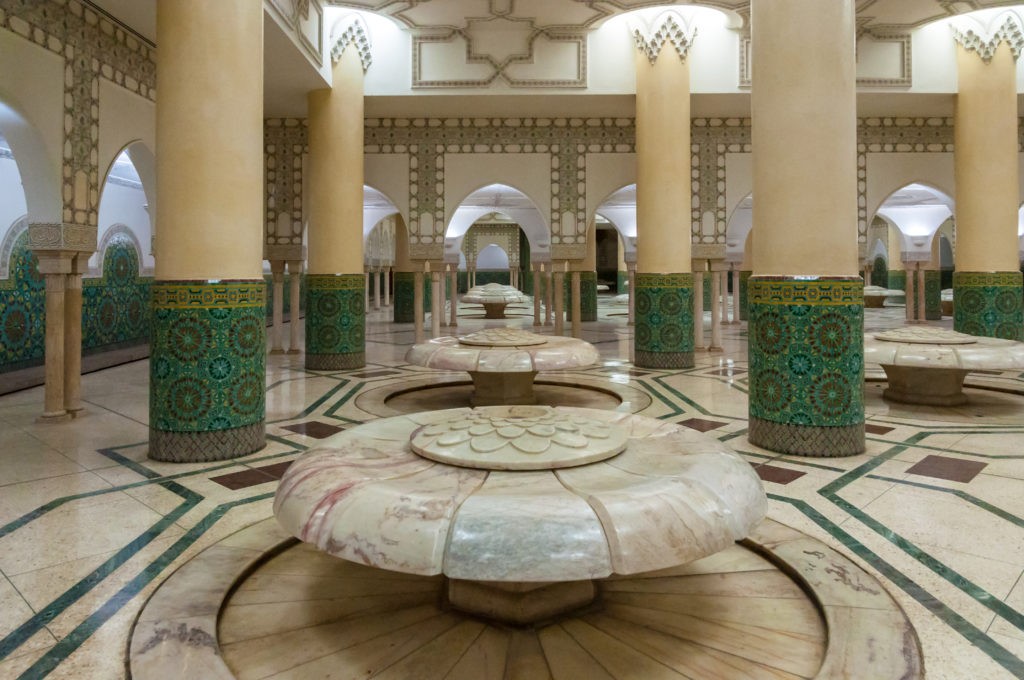 Late in afternoon, you will visit a traditional Hammam. Enjoy a 45 minutes of scrub with black soap or spices for relaxation. After your Hammam experience, sway to the massage place where you will enjoy a tonic massage of the Moroccan tradition that will help to eliminate tensions in order to regain energy and vitality.

Leaving Fez this morning, we drive through the Middle Atlas into the south with a break in the quiet French built Alpine resort town of Ifrane.  We continue our journey while we enjoy scenic views of verdant cedar forests, volcanic mountains, wind-swept plains, spectacular gorges, and stony desert. We travel along the marvelous oasis of the Ziz Valley before arriving Erfoud, the port of entry to the Saharan dunes and sits at the southern end of the Ziz Oasis. Known by the name of “the Gate of Sahara Desert”, it was built new by the French around 1920’s as a French administrative outpost and Foreign Legion stronghold. This frontier town on the Algerian border has a definite Wild West (in this case, Wild South) feel to it.

Fossilized bathtubs and moist, sweet dates are its current claims to fame, though it was once the end of the road and then overland to Merzouga, the heart of the desert, and serf the sandy sea on a powerful 4 WD Land Rover. Dinner and overnight at the desert Camp.

Start the day with an early morning sunrise camel ride along the golden sand dunes in Merzouga. Return to for breakfast before driving to Tinghir via Rissani and Tinjdad. Tinghir is a gorgeous, 40km oasis, which boasts one of the largest palm groves in the country. 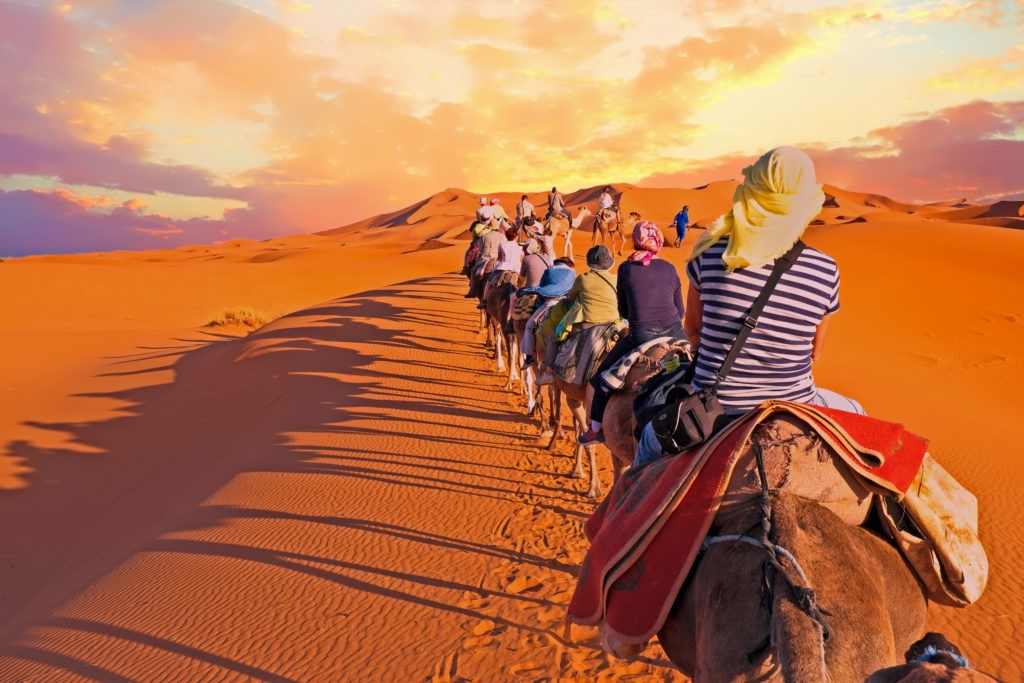 Camel caravan going through the sand dunes in the Sahara Desert, Morocco.

Enjoy walking at the famous Todra Gorge, a 300m wall, carved deep into the High Atlas Mountains. Leave Tinghir heading to Dades and its charming valley. Stop there to take pictures then continue along to Kelaat M’Gouna, a large village famous for cultivating roses. Expect to find many fine, rose-infused products there. Transfer to Ouarzazate, also known as “Morocco’s Hollywood,” for dinner and overnight.

Enjoy the city tour of Ouarzazate, beginning with the Taourirt Kasbah. The latter is considered one of the most beautiful Kasbahs in the country and the film studios (optional visit), where some of the most famous desert landscapes are being shot. Continue to the spectacular fortress of Ait Ben Haddou, the iconic landscape immortalized in films such as, Lawrence of Arabia and Gladiator. Leave Ait Ben Haddou crossing the High Atlas Mountains via the magnificent Tiz In Tichka pass (2262m) to Marrakech. 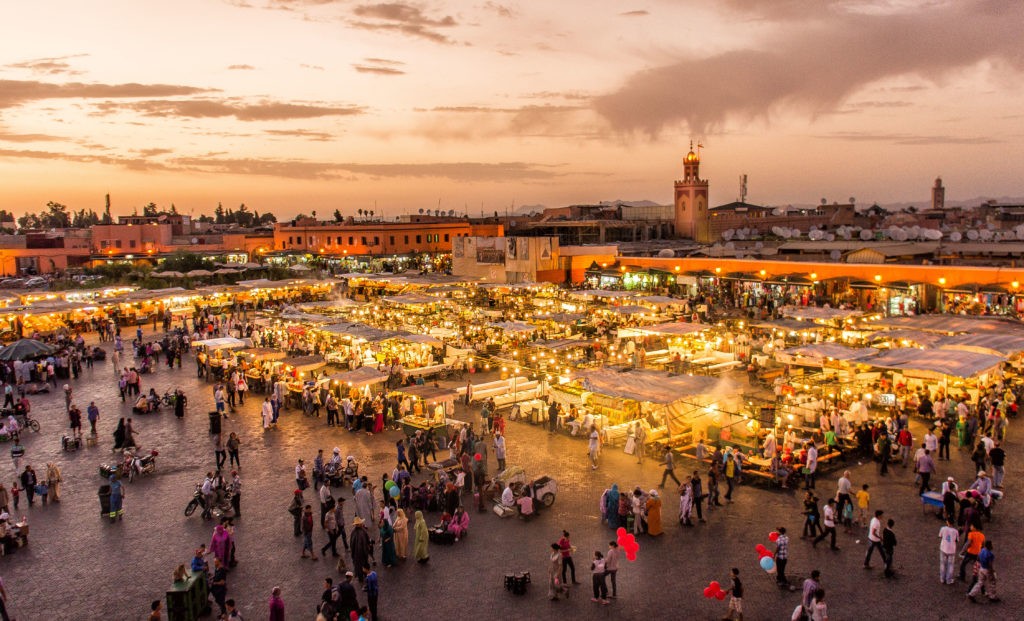 Marrakech is considered as one of Morocco’s most cosmopolitan cities and boasts a spectacular location surrounded by farmlands and snowcapped Mountains including the highest peak in North Africa rising at 14,000 ft. As we start our visit this morning we will discover an exciting blend of modern architecture and an ancient walled medina. We will first stand by the Koutoubia Mosque with its 282 ft minaret, an architectural landmark dating back to the late 12th century. We will then enter the Kasbah from Bab Agnaou gate to visit the historical and beautifully ornate Saadian necropolis of the 16th century. Our walk through the 12th century Kasbah and its food market, bakeries and narrow alleyways will lead us to the Badii palace built in the 16th century. Here we will admire the marvelous pulpit of the Koutoubia mosque made in 1137 in the city of Cordoba by the best cabinet making artisans of that time. We will continue to the 19th century Bahia palace and discover the intricate work done by the local artisans to decorate this splendid home built by a powerful Vizir for his Harem. We will end our exploration with a stroll inside the Jewish quarter and visit the historical synagogue built in 1492 by Sephardic Jews expelled from Spain. 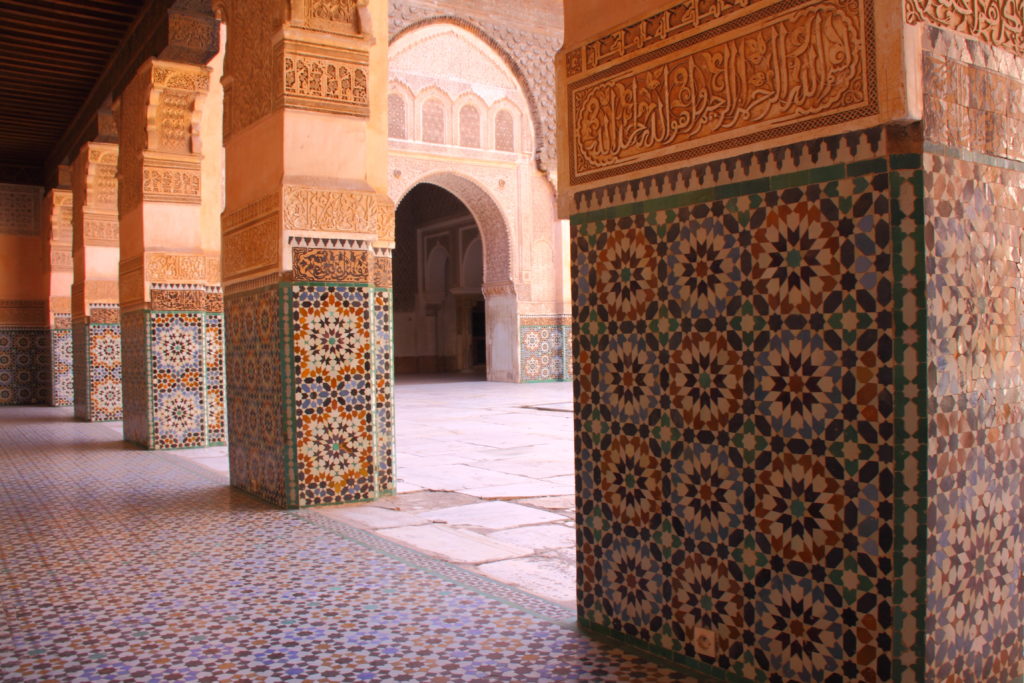 After a break for lunch (on your own) we will be guided through the “Hidden sides of Marrakech” where we will admire the architectural beauty of Medersa Ben Youssef, a medieval theological school dating back to the 16th century as well the oldest building in the city called the Koubba of the Almoravides, a dynasty who ruled in the 12th century. From there we will start exploring artisan quarters and the colorful Souks to interact with the real life of Marrakech people. 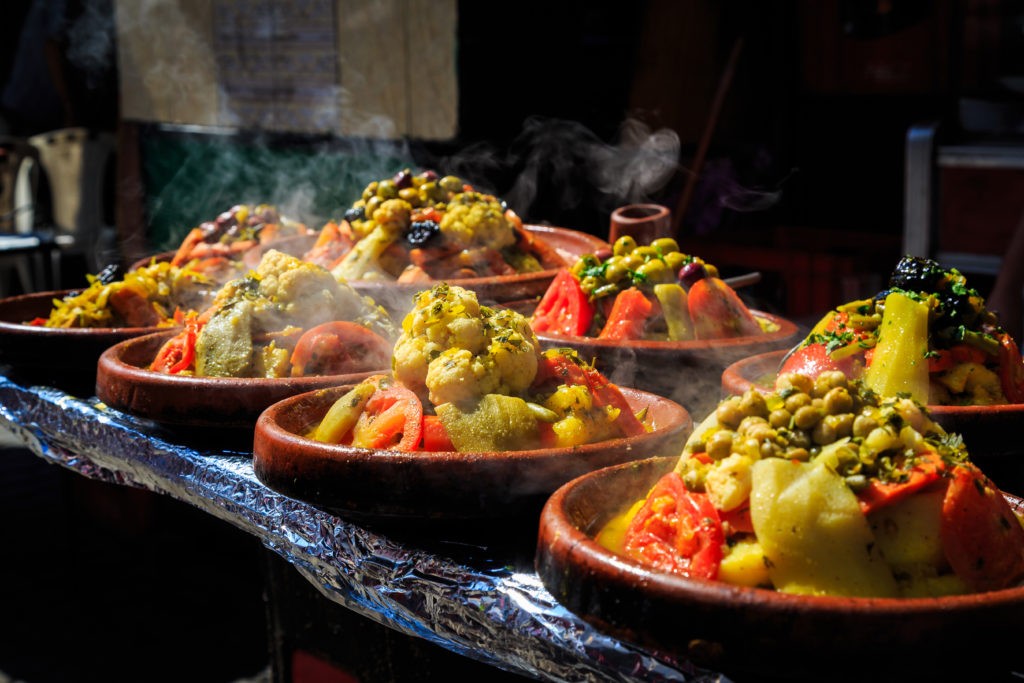 Warm tagines with delicious vegetables on a market in Morocco

Before sunset we will stroll in the square of which the city is so famed, Jemaa El Fna, where hundreds of locals and tourists come to spend the end of the day watching jugglers, dancers, fortune tellers, story tellers and traditional musicians. At 5:00PM, we will take a cooking class, in which your prepared meals will be served as dinner.

In the morning, you will be met at your hotel and head south to Imlil valley in Atlas Mountains, from where you will start a gentle walk to get to Aremd village at an elevation of 6000 ft. A short walk through the village and learn about the agricultural products in the valley and their culinary values before you sit for a Moroccan tea with the locals. In the afternoon, you will walk downhill through orchards to Imlil for transfer back to Marrakech for farewell dinner and overnight.

Day 10
After breakfast, we will assist you with your transfer to Casablanca airport for your return flight home.

We have a limited number of spaces – to hold your spot

Rates are subject to change until a deposit has been made.

SEE YOU IN MOROCCO!! 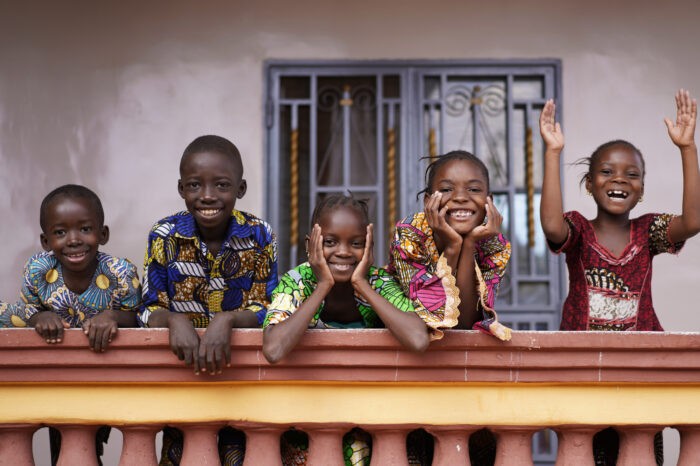 Students journey to another country and culture to meet other students using today’s digital technologies. The blending of travel, technology and experiential learning empowers students to learn, connect and grow through shared learning experiences. The field trip focuses on the […] 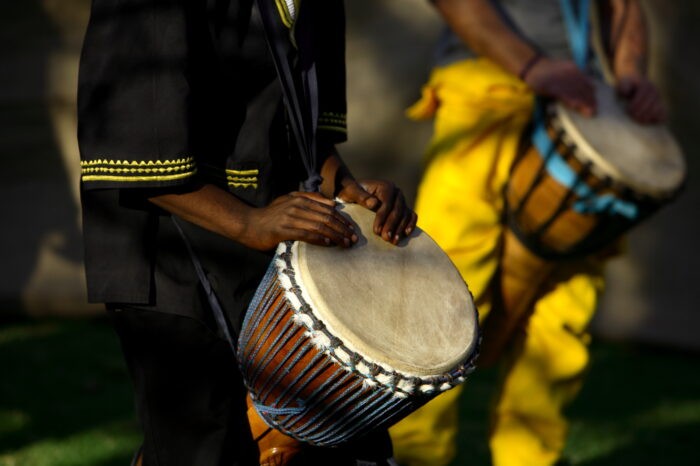 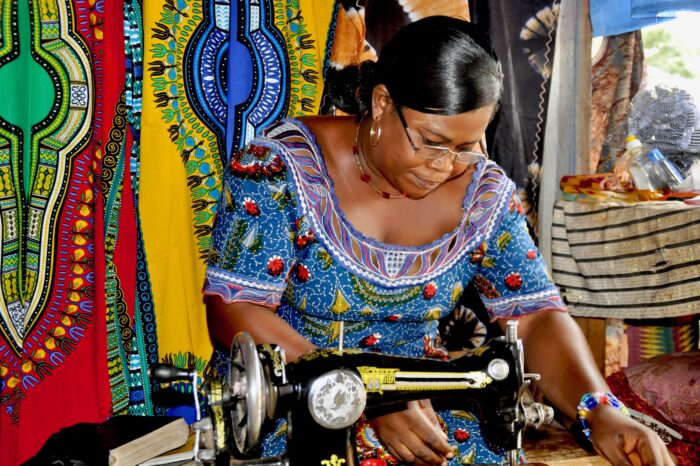 Our Virtual Service Learning programs focuses on service and virtual volunteer activities that empower communities both economically and socially. According to Wikipedia, Service-learning is defined as an educational approach that combines learning objectives with community service in order to provide […]

Join us in Morocco!!